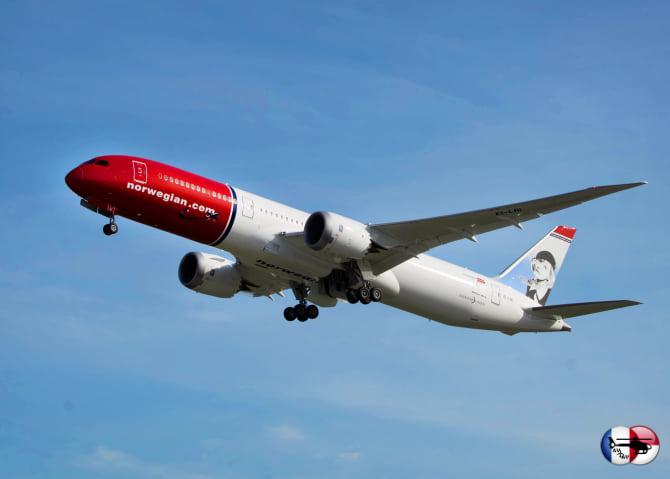 Low-cost airline Norwegian has set a new record time for the fastest ever transatlantic flight by using the Boeing 787-9 Dreamliner.

Norwegian flight DY7014 from New York JFK to London Gatwick on Monday 15 January completed the full duration of the flight in 5 hours and 13 minutes – the fastest transatlantic flight recorded on a subsonic commercial aircraft. The previous record was 5 hours and 16 minutes.

Europe’s third largest low-cost airline, operates double daily flights between London and New York using the Boeing 787 Dreamliner. The flight benefitted from strong tailwinds over the Atlantic Ocean that reached a maximum of 176 knots (202mph). The tailwinds pushed the aircraft to a top speed of 776mph during the flight.

The Boeing 787-9 Dreamliner aircraft (G-CKHL) used on the record-breaking transatlantic flight adorns British tail fin hero Amy Johnson, a pioneering pilot who was the first female to fly solo from England to Australia in 1930.

“The 787 Dreamliner is a pleasure to fly and it’s a great feeling to know that we have set a new record in this aircraft. We were actually in the air for just over five hours and if it had not been for forecasted turbulence at lower altitude, we could have flown even faster.”

The day before the record-breaking flight, London Gatwick-based Captain Pascal Niewold recorded his fastest ever transatlantic flight of 5 hours and 20 minutes while flying the Boeing 787 Dreamliner from New York to London on Sunday 14 January. The flight had a maximum tailwind of 195 knots (224mph) and reached a top speed of 779mph.

“The passengers and crew were very pleasantly surprised that we were already landing in London. It was a very smooth flight with almost no turbulence and as a result of the jet stream we arrived 25 minutes early.”